In today’s podcast episode, Skilled Trades Shortage Myth, Brett and Tim discuss whether there is, in fact, a legitimate talent shortage in the trades. 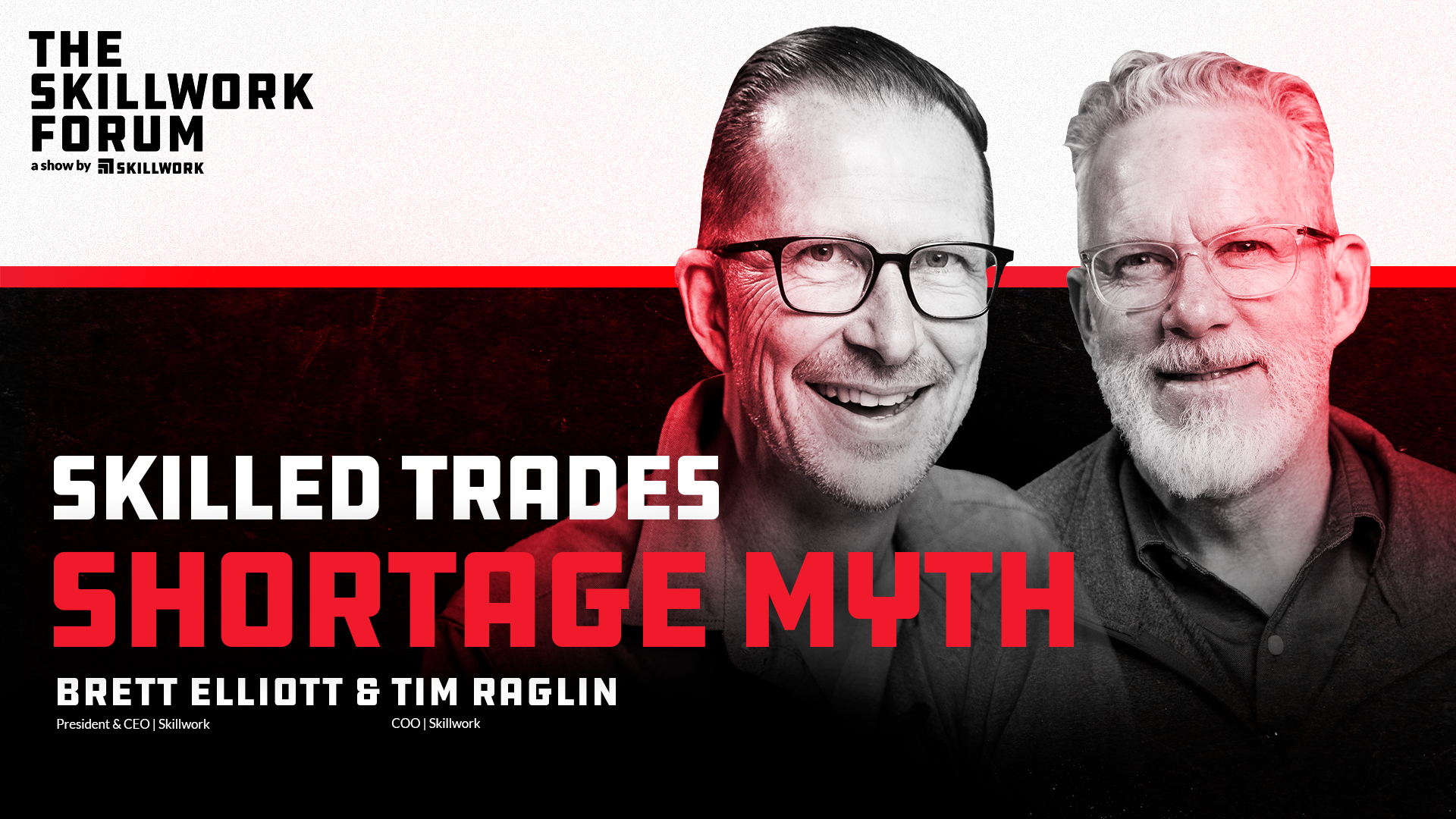 Everybody talks about a “skilled labor shortage.” However, some would say that we don't really have a shortage of skilled workers; we have an incentive issue, which is an interesting way to look at it.

Before dismissing that argument entirely, we ought to look at the facts.

Is there a skilled workforce shortage, a shortage of well-paying trade jobs, or an attitude problem?

If you ask skilled workers those three questions, they’d likely respond by saying it’s certainly a pay issue. “If you’d just pay us more, we wouldn't have a skilled trades worker shortage.” In their minds, skilled labor wages are too low to incentivize tradespeople to accept new jobs, creating a shortage of skilled workers.

But what factors are causing the skilled labor shortage if it’s not a myth?

Let's look at the heart of this severe talent shortage.

The Baby Boomer Exodus, The Great Resignation, The Big Exit – however you want to refer to it – is a very real thing. The current rate of retirees to new hires in the skilled trades industry alone is three to one.

For every three baby boomers retiring from skilled trades, only one millennial or Gen X is ready to take a job in the trades. This three-to-one ratio is not sustainable. 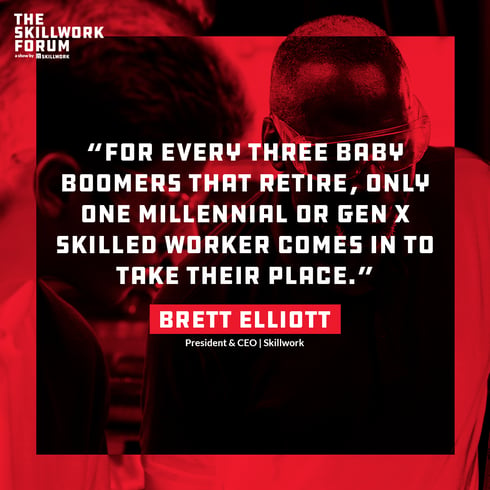 The impact of COVID over the last two years has been detrimental to the trades. The reality is that COVID took an already strained workforce and accelerated the issues.

We talked to many facilities that lost skilled tradespeople sooner than they hoped. Most assumed they could get some of those baby boomers to work another three or four years, but many boomers left early because of the challenges and the environment created by COVID.

The number one request that our clients ask for when we recruit tradespeople for them is elevated trades skills. As facilities are forced to automate more and more because of the shortage of skilled workers, it’s creating more demand for control technicians, electrical engineers, and specialty skill sets.

Considering these three factors alone, the general lack of tradesmen is not a myth; it’s an undeniable fact. Now the question becomes, can we incentivize skilled tradesmen to take jobs in construction and manufacturing?

After discussing pay, we propose the last two factors leading to the skilled labor shortage, so keep reading!

How Much Do Trade Workers Make?

Let’s dig deeper into why there’s a shortage of skilled workers available to employers.

The most common misconception is that there are no well-paying trade jobs. Young people and adults alike believe that if they join the trades, they won’t be able to support themselves, their families, or their aspirations.

Here are some statistics and hard facts. 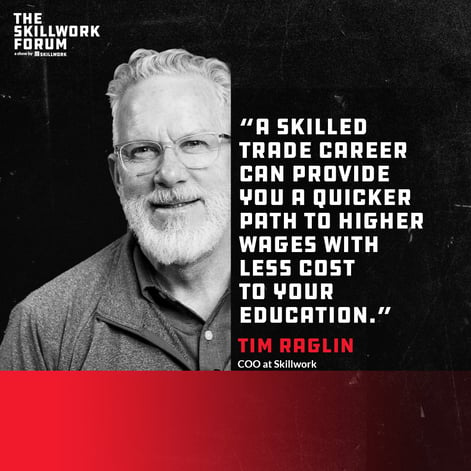 All of that to say, skilled labor wages are much more competitive than traditional jobs, you can start working sooner, and you incur way less debt in the process.

Not convinced? Here’s a list of the four best-paying trade jobs.

These statistics indicate that pay being the biggest deterrent for people entering the trades is a skilled trades shortage myth. Numbers don't lie; people do—and these are the numbers.

So what is it?

Why Is There a Shortage of Tradesmen?

In our opinion, the lack of tradesmen is most of all a popularity issue: people undervalue tradesman.

Today, we see the cost of devaluing the trades for the past 20 years. What does that mean?

Ask yourself, when's the last time that you went to a high school graduation party and the senior says they’re going into the trades? Our natural tendency is almost always to ask, “Where are you going to college? What are you planning to study?”

We're not expecting them to say, “I'm going to get my electrical degree so I can become an electrician.”

Marketing is what happened.

This skilled trade stigma has been ingrained in each generation. We’ve been sending the message that attending a vocational school or getting an alternative education is a bad idea.

Mike Rowe points out that every high school counseling office in the 70s or 80s had a sign that said, “Work smarter, not harder.” These subtle messages communicated that if you choose to learn a trade, you’re somehow lesser than those going to a university.

When you teach that perspective to a whole generation, are we surprised that the trades have three people leaving to every one person entering?

We've got to change this trajectory.

We have to change the cultural attitude and “flip the script” when talking to young people about their futures.

How many times do we hear things like, “I don't know what path I'm going to study. I'm just gonna go to college and find myself and experience new things, people, and places.’” Don’t take this the wrong way – we see the value in a college education.

But think about when you're driving down the highway, and you see somebody in a plumbing company’s work van. What's your first thought? “This guy’s skilled labor wages are probably 30% more than mine with no debt”? Likely not.

We need to make a paradigm shift.

We appreciate people like Mike Rowe, and we’re seeing more and more people wake up to this idea that the trades are a viable option for young people. College is not the right fit for everyone, and we need to acknowledge that instead of forcing a popular opinion on others.

Don’t make kids feel lesser or not as smart as their friends if they decide to go into the trades.

We founded Skillwork on three values, the first two being (1) bring honor to God and everything we do (2) and bring honor and respect back to the trades. 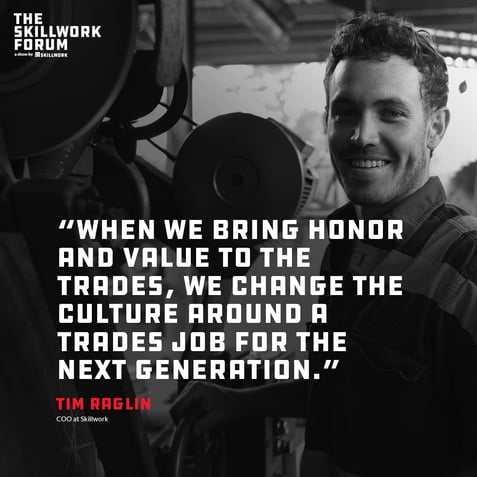 In addition to those values, we strive to bring value and respect back to those considering what path they will choose. And for some of them, entering the trades is the right decision. For others, a four-year college education is the right start. Either way, we should view both directions as equal.

God's perspective on this is clear in Romans 2:11:  “God shows no partiality.” In His eyes, we're all equal. We believe that everybody has intrinsic value. Your worth isn’t determined by what school you went to or what job you have, but, as Dr. Martin Luther King said, by “the content of your character.”

Our episode today wasn’t necessarily about the skilled labor shortage. Although we did bust the skilled trades shortage myth, we uncovered the why behind it: a cultural mindset that stigmatizes the trades instead of honoring them.

Hopefully, today’s show will encourage you to provide neutral advice to a youngster looking for a career path. You may even consider pointing them toward considering a trade as an honorable path forward.

If you’re a tradesman looking for work, get in touch with Skillwork. Skillwork is a veteran-owned recruitment agency that specializes in the trades. Our recruiting process involves four simple steps:

Don’t worry, we handle all of the details! And when your assignment is complete, we’ll also help you get a new one lined up. Talk with a Skillwork recruiter today about applying for a high-paying trades job.

It’s no secret to skilled labor employers that there’s a skilled labor shortage in manufacturing and commercial construction. But why is there a shortage of skilled... 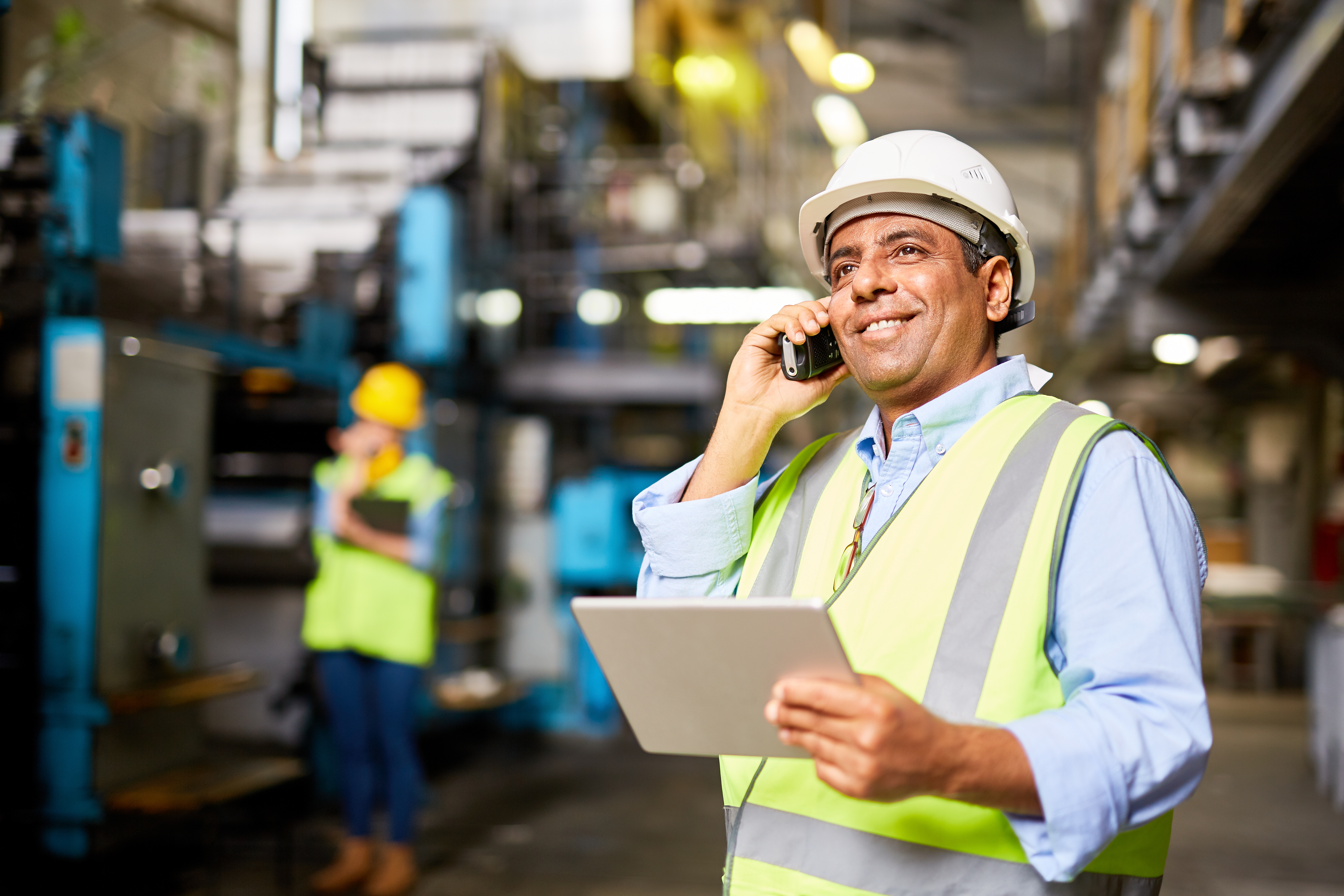 2 Ways to Find the Best Recruitment Agency for Skilled Workers

Attracting and retaining skilled workers over the past ten years has become more challenging than ever before. With a shortage of nearly 1 million skilled workers...